Coins for Christ Raised Joy and $2,207 for United Thanks Offering (UTO) 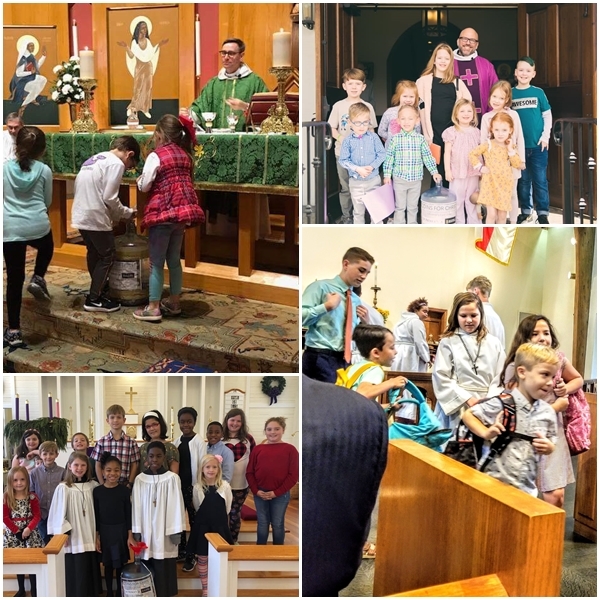 Long ago, in the distant past of Advent 2019 and early 2020, before the world faced the COVID19 pandemic, four of the parishes in the Diocese of Louisiana decided to have a friendly competition. St. Augustine’s, Metairie, and All Saints’, River Ridge, teamed up against St. Margaret’s, Baton Rouge, and St. Patrick’s, Zachary, in a fierce battle to determine whose youth were the most committed to Christ Jesus.

We called the competition, Coins for Christ. The format was as follows: Beginning the first Sunday of Advent and ending the last Sunday before Epiphany, the youth at each parish were challenged to collect as many coins as they could. Each week, during the offertory, the coins the children gathered were placed in a barrel, which was located at or near the altar in their church. At the end of the competition, the team that had raised the most money (which was given to the United Thank Offering) would have proven their faith and resolve to be greater than their competitor’s.

As is often the case with intense competition, there were many lessons learned during the Coins for Christ contest. Since the rules outlawed adults from place any coins in the barrel, each week the children and youth walked forward with their bounty and laid it at the altar (in the barrel). This act seems to have produced multiple outcomes. It was extremely entertaining for the adults to watch the children approach the altar with such vigor and energy. Fr. Tommy Dillon of St. Margaret’s, said it this way, “I had no idea coins could make so much noise when they were dumped in a plastic barrel during the offertory, especially when a young child is dropping coins in slowly. Once everyone realized what the noise was, they really enjoyed seeing the children share their joy within worship.”

Joy wasn’t the only outcome produced by the competition. Fr. Jay Angerer, of All Saints stated, “the biggest surprise for me . . . was the conversations it produced. 70-year-old retired parishioners were talking to Millennial parents asking to give their change to the children because it was against the rules for adults to put change in. Those conversations have led to building community.”

Fr. AJ Heine, of St. Augustine’s said it best, “it was great to see the delight in both the kids and adults. Who knew you could combine generosity, gratitude, and giving along with a little good-natured trash talking between clergy friends?”

In the end the Holy Spirit proved once again that God’s grace is a noncompetitive transcendent reality in our lives, regardless of how intense our competition may have been. The two teams tied, raising a grand total of $2270.00 dollars for the UTO.

Perhaps the most important outcome from the Coins for Christ competition was the example the children provided. This large sum raised by some of the church’s smallest members demonstrates the reality that giving to further the Kingdom of God, it is not simply an act of sacrifice. Rather, our giving, when done joyfully, empowers us and those around us to experience God’s grace, love, and abundance in new and exciting ways. Thanks be to God for giving us their example to follow.