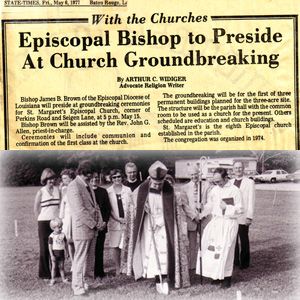 Watch our 50th Anniversary video created March 2022 which tells you about the history of the church from its beginnings until today!

Our Church’s humble story begins with a group of twelve people meeting in the back of the old Vince’s Bar and Restaurant on March 19, 1972…that’s right- an Episcopal Church started in a bar during Lent. By December 31, 1973, that group had doubled in size and made a commitment to its future by signing a charter that officially made St. Margaret a congregation of the Episcopal Church.

St. Margaret, Queen of Scotland and patron saint of motherhood, was chosen as our Church’s namesake for her generous spirit and example of giving to the poor and orphaned. There are descendants of St. Margaret amongst us.

On August 25, 1974, we held our first worship service on our current site in a temporary classroom building purchased from the Board of Education with the Reverend John G. Allen officiating. By 1977, Bishop James Brown broke ground for the first permanent structure on our site. This was a monumental step for our mission church, and true to the stewardship of our pioneers. However, we cannot go without thanking the many churches in the diocese that donated items of worship, hymnals, and funds for furnishings. With the dedication and commitment of our members, everything came together, and the St. Margaret was dedicated on January 15, 1978.

We’ve grown since our days at Vince’s Bar, and we continue to evolve through the grace of God and the love of our parishioners. We have so much planned for the future of St. Margaret’s, and we invite you to join us as we continue to grow.

Share this page: Our History
Welcome We Can't Wait To Meet YOU! What we believe? Clergy & Staff Vestry About our Patron, St Margaret of Scotland Our History
View Entire Post